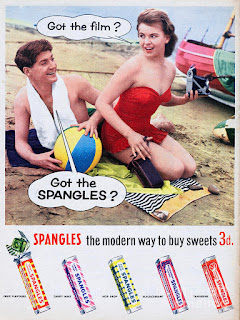 The other day the fate of Spangles crossed my mind. I’ve no idea why because as a youngster I didn’t much care for them. Hard little sweets with uninteresting flavours I thought. One crunch and they were gone.

Spangles was a brand of boiled sweets manufactured by Mars Ltd in the United Kingdom from 1950 to the early 1980s. They were sold in a paper packet with individual sweets originally unwrapped but later cellophane wrapped. They were distinguished by their shape which was a rounded square with a circular depression on each face.

Amazing to look back on the junk we consumed as youngsters, but we didn't become fat on it. I quite enjoyed Flying saucers for some reason, probably the obvious connection with aliens from outer space. Didn't know about the connection with communion wafers though - not until I looked it up.

The first flying saucers were produced in the early 1950s when an Antwerp based producer of communion wafers, Belgica, faced a decline in demand for their product. Astra Sweets now owns the Belgica brand and continue to make the product. 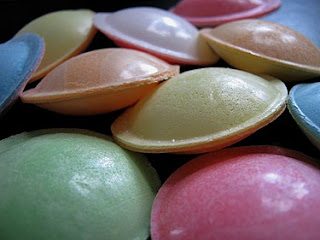 Email ThisBlogThis!Share to TwitterShare to FacebookShare to Pinterest
Labels: History

My great chum, Charles G. and I had a Spangle fight when he came to stay with me around 1956.

There were bits of sugary stuff everywhere, and my mum had to clean it all up later!

They were square, and difficult to get out of the packet, but the peppermint ones were quite nice - even better than Polos!

We certainly didn't get fat on all that sugar and junk food. There were very few children who were overweight. I suppose we had a more active outdoor life.

It didn't do much for my teeth, though.

Now you've started something. I remember when a Mars bar cost a lot - 4d - and was so big and rich that I couldn't eat it all at once!

Four for a penny chews! I still have some farthings for them.

And fake cigarettes, choc stick in a paper wrapper - how we pretended to be older and smokers!

Sam - it didn't do much for my teeth either, although I think some of that was the NHS dentistry.

Jannie - I generally avoided Mars bars for that reason - too big. I suppose a strictly limited budget meant we weren't used to huge amounts of sweet stuff anyway.

Ed - I remember fake liquorice pipes with tiny red balls for the glow of tobacco.