Wartime juries and other clues

Labour is calling for juries to be cut from 12 members to seven, to stem the "gravest crisis" in the justice system since World War Two.

He argued that smaller juries and the use of more temporary courts would allow socially distanced trials.

It is the wartime imagery which is being promoted here. The let's roll up our sleeves and get on with it imagery. We are familiar with martial language and references to war whenever political activists call for mass mobilisation in pursuit of a favoured cause. It is part of our political culture.
The war on drugs, social justice warriors, climate warriors, the war on poverty and now we are fighting a virus with many of the tools of totalitarian politics, particularly the language. We are all in it together as they say - again.

The UK government response to the coronavirus outbreak has obviously been totalitarian. No significant freedom of choice relating to the virus has been left to the individual. The whole debacle has been managed in great detail by government and its chosen experts. Much like wartime.

It is all medically necessary or not – make your choice but it is a good idea to remember the politics. Either way, the totalitarian ratchet has advanced quite a few notches and there is no reason to assume it will ever go back.

Yet in Mussolini’s Italy –

This comparison is definitely not intended to lump the UK government with any fascist governments of the past. We have moved on from that thank goodness, but moved on to what? A kinder totalitarian ethos?

Perhaps we have, so it is worth pointing out how similar one version of comprehensive state provision is to other, less cuddly versions in the past. It is worth recalling how similar the political rationales and the martial language are if we compare then and now. A single, materially benign political ethos run by an elite with expert guidance. Who could quarrel with that? Not that there was any opportunity to quarrel with it in the past. How about now?

Forewarned is forearmed as the saying goes and it is perhaps unwise to obscure important historical similarities by placing too much reliance on the totalitarian ratchet going into reverse. Too many people like it as it is. 1925 is not so far away when it comes to human nature.
Posted by A K Haart at 08:12 No comments:

Email ThisBlogThis!Share to TwitterShare to FacebookShare to Pinterest
Labels: totalitarian

All those wasted hours

After some years of watching virtually no terrestrial television, when I do catch a glimpse it comes across as curiously depressing. Not head in hands, is it all worth it, goodbye cruel world depressing. No, television depression stems from its tendency to suppress. It is a know your place kind of suppression, a don’t step out of your social shell because you can’t kind of suppression.

What is more, it isn’t depressing until we step outside the television world and see the suppression for what it is. Until then it is a kind of latent depression, a willingly chained soul kind of depression where many things may be amusing but nothing is stimulating. Even cookery programmes have morphed into a you can’t cook like this but you can watch us version of talking down to the chained souls.

TV news is relentlessly negative and this is what lingers, not the amusing snippet at the end where the presenter ekes out a faint smile.

TV weather is relentlessly negative. Even good weather carries health warnings about exposure to the sun.

TV drama is unrelentingly grim. Mostly people scowling at each other.

Even celebrity interviews show the audience what they cannot possibly be.

Television is not one hundred percent gloom of course. To many viewers would probably switch off if there no reasons to be cheerful and in any event gloom is not what it sells. What television does is to suppress the spark of individual inspiration, the joy of life, the realisation that there is a world of limitless fascination out there. Television is limited and viewers are persuaded to accept those limitations.

That’s how television suppresses and why looking back tends to depress those who escaped. All those wasted hours…
Posted by A K Haart at 16:30 5 comments:

Email ThisBlogThis!Share to TwitterShare to FacebookShare to Pinterest
Labels: media

Don't do as I do seems to be the message

The Labour leader said he currently had no COVID-19 symptoms and would be working from home for the next week...

This is the third time Sir Keir has had to self-isolate during the pandemic - previously being forced to quarantine in both September and December.
That appears to make it three false alarms. How surprising says absolutely nobody.
Posted by A K Haart at 16:40 4 comments:

Email ThisBlogThis!Share to TwitterShare to FacebookShare to Pinterest
Labels: health

The public's trust in the way the UK is run is breaking down, former Labour prime minister Gordon Brown has warned.

He said Covid-19 had exposed "tensions" between Whitehall and the nations and regions, who were often treated by the centre as if they were "invisible".

Mr Brown is urging Prime Minister Boris Johnson to set up a commission to review how the country is governed...

He points to "bitter disputes" over issues such as lockdown restrictions and furlough and said unless underlying tensions were resolved, the UK risked becoming a "failed state".
Of course we are treated by the centre as if we are invisible, we learned all about that in the Blair/Brown years. It is a little rich of Brown to put it forward as a criticism now, but he knows that. It's a move in the game. An obvious move but they usually are.
Posted by A K Haart at 11:53 4 comments:

How can Sleepy Joe be woke?

Wigan's MP has defended her decision to label new US president Joe Biden a 'woke guy'.

She was asked why she referred to him as 'woke' - a term which is sometimes used to describe politicians with liberal social views but can be used by critics to suggest a person is overly sensitive to social issues.

Mrs Nandy said Mr Biden's attitude was 'the sort of leadership frankly that we’re lacking here in the UK'.

She said: “Joe Biden is somebody who knows exactly who he is and what he stands for and he’s very comfortable with it.
Posted by A K Haart at 15:50 9 comments:

One problem with the coronavirus debacle is settling on good words to describe it because naturally enough the situation keeps changing.

I stuck with the word ‘debacle’ from the early stages because that seemed to convey at least some aspect of the UK bureaucratic bungling, the grotesquely expensive and destructive policy and the unwillingness of government to make use of natural adult caution in the general population. Admittedly ‘debacle’ does not convey the grotesque nature of the decision to stamp on civil liberties.

So where are we now? Much official data seems unreliable in the sense that it is not as relevant as it could be. Much seems exaggerated, presented in misleading ways, too simple or just missing. So much so that we are perilously close to the d-word – deceit. Some may say that has been there from the beginning, but to my mind the coronavirus debacle hasn’t been particularly deceitful until fairly recently.

All of which allows deceit to take the strain but won’t lead us anywhere useful. To my mind this is what is happening now. Deceit is being allowed to take the strain of failing to formulate a rational exit from this debacle because absolutely nobody is willing to carry that particular can.

Not only that, but we can be moderately sure that intransigent blockheads on the inside of government deliberations are likely to block the way to a rational exit. They are also likely to stir up a media sensation if they are left out of exit deliberations. It’s the nature of the beast.

As coronavirus deceit becomes more obvious, it becomes more plausible to suggest that other narratives have infected the debate. The obvious one is the ten point plan which has deceit written into its genes. Here we may certainly surmise that coronavirus deceit could be our first taste of the green industrial revolution. Our first taste of the wholesale deceit it is bound to entail. At times it certainly feels like it.
Posted by A K Haart at 12:50 6 comments:

Email ThisBlogThis!Share to TwitterShare to FacebookShare to Pinterest
Labels: Lying 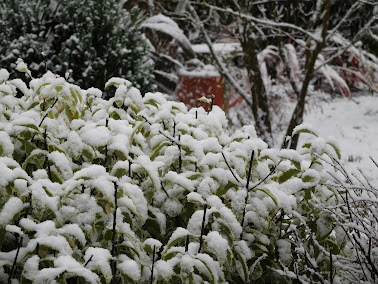 Blimey - almost as soon as Joe Biden signs up to the Paris climate agreement it begins to snow here in Derbyshire. Are the two events linked? Is there any point to recycling all those yogurt pots?
Posted by A K Haart at 11:12 4 comments: