Published almost as year ago, but still a sombre reminder of lives destroyed by the desperation induced by totalitarian politics. Worth a look if you haven't seen the photos.
Photographer captures eerie graveyard of North Korean schooners scattered along the Russian coast 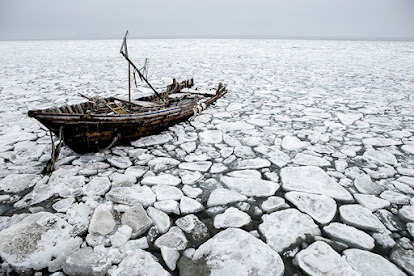 Photographer Natalya Bulkina travelled to the place locals call the Pirates Graveyard - a long stretch of deserted beach several hours away from Vladivostok, close to where the borders of Russia, North Korea and China nearly join each other.

This is one of the areas in the Far East of Russia where North Korean poachers’ wooden boats end up after getting hit by storms.

Sometimes they carry exhausted fishermen, quite often they are thrown ashore with their bodies on board - or empty.

‘This story gave me a strong feeling of despair, audacity, risk and fear, as I was taking pictures of what was left of the poachers’ boats. Standing close to them you just about guess the drama of these people who went into the sea in such flimsy vessels,’ Natalya told The Siberian Times.
Posted by A K Haart at 12:19

Odd when even Russia looks like a beacon of caring liberalism and marine wildlife conservation in comparison with NK.

Moving photographs. I wondered if their crews were trying to better their own families' lot or if they were ordered to sea "for the greater good" by the big dealer and his henchmen.

Sam - yet Russia does look like a beacon of caring liberalism compared to North Korea. Maybe corruption is better than maniac repression - or both.

Jannie - my guess is that they were ordered to sea "for the greater good", but maybe some were trying to escape.