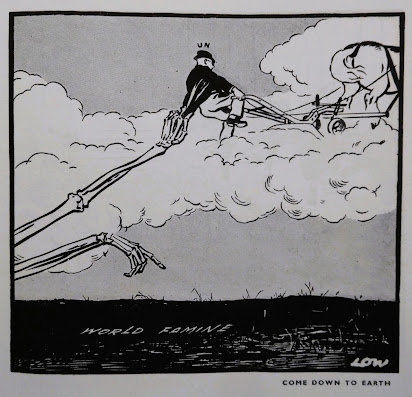 A recent charity shop find was a copy of Sir David Low’s political cartoons published between 1945 and 1953. The cartoons give an interesting flavour of the times. Each one has the publication date and a brief explanation of its subject. Text under the above cartoon reads –

Failure of the monsoon had driven the food situation from bad to worse for the 500 million people in India and the East. Five to fifteen million Indians were threatened with death from starvation and conditions in Malaya were nearly as bad. The United Nations were made aware by urgent messages from the Director-General of UNRRA that food came before politics as the first and greatest problem of the Far East.

Today of course, monsoon failure would be blamed on the developed world via the climate change narrative. It's the kind of thing bureaucrats always do, but we know that now.

As usual, the UN were months behind and still waiting for boxes to be ticked...

Scrobs - maybe that's the urgency, a shortage of boxes to tick.