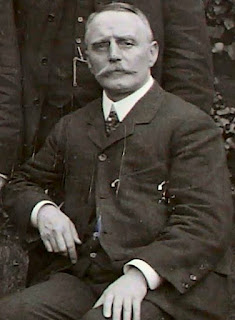 I've been scanning an album of old photos today. Mainly to reduce the space taken up by bulky photo albums we never look at from one year to the next. Some photos are deteriorating, so I had to do something about that anyway. Presumably the digital versions will last, but how we'll pass them on when we pop our clogs I don't know.

All the photos I scanned today were from the seventies, from about 1972 to 1979 and there were about 120 to scan. In the era of the digital camera, a similar period seems to generate about ten times as many and I suspect it would be no great loss if I were to delete ninety percent of them.

Digital clutter has replaced physical clutter I suppose. Oh well - there are quite a few more albums to go.

Email ThisBlogThis!Share to TwitterShare to FacebookShare to Pinterest
Labels: social

A K Haart,
You're probably way ahead of me but when I did similar I saved them all to a portable hard drive along with anything else that won't change but was worthey of archiving so family know where everything is when I'm gone.
Plus it's a form of protection in case of computer crashes. Computer gone - photos etc safe.
I also use a USB thumbdrive for all daily data thus, again, in the event of a computer crash I may lose software - easy to re-install - but all data relating to said software is safe.
As I said, sorry if you're way ahead of me.
Keep scanning my friend.

You raise something most of us have to face at some time, a huge library of our personal past that no one will have more than a fleeting interest in when we have gone.
My wife retrieved a large envelope when her mother died years ago, it still awaits 'sorting' on a shelf somewhere.

I have scanned and printed some of the more important ones, including many negatives, but who exactly will care about any of it down the line, perhaps it should all go to the crematorium with ourselves when the time comes, yet until then we can't somehow let go.

...and in the end when the oldest generation go, the grown up children take a handful of the best photographs, perhaps some treasured furniture or ornaments, and the remaining photos and stuff are part of the 'house clearance'.

We've culled a lot of physical photos, and I keep intending(!) to thin out the tens of thousands of digital photographs. I keep digital copies on removable disks too. But I know that everything is ephemeral and won't last, and I am comfortable with that.

I inherited a load of photographs and better, a lot of negatives when my last immediate family member died.
The negatives were best because the good original print was always given away.
I scanned them all and then shared them all, via, CDROM, with extended family and old friends.
My older relatives were delighted and would recall with pleasure people who meant nothing to me.
Adults amazed to their parents young.
It also stopped the decay of colour prints and negs. The monochrome live for evrr.
It was worth it just to see the faces light up and histories related.

Mac - at the moment the photos are all backed up in the cloud, but I intend to buy a portable hard drive when the scanning is done, because if the cloud storage subscription lapses it's all gone. Cloud backup is handy because it is always running, but I also want everything backed up on something I actually own.

Wiggia - that's the problem, who would want all of it? We may keep a few actual photos to pass on and cull the digital stuff quite drastically once sorted.

DJ - I'm comfortable with it too, but I'd like it to be easily available if a member of the family does want it after we are gone.

Doonhamer - I no longer have any older relatives who would have known people in the older photos. It's also too remote for the grandkids to take an interest, although one day they may want to know more about their family history.