Lichens on the stones of circumstance 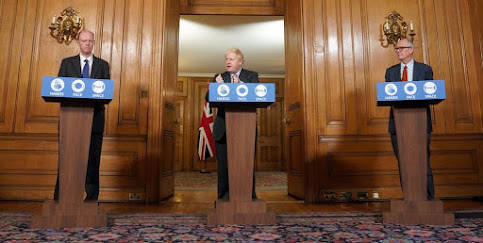 You perhaps know how it is with simple natures that fasten themselves like lichens on the stones of circumstance and weather their days to a crumbling conclusion. The great world sounds widely, but it has no call for them. They have no soaring intellect.

Theodore Dreiser - The Lost Phoebe (1918)
As we know, a core problem with the coronavirus debacle is that it may be absurd but is not entirely based on absurdities. The virus is real, poses a moderate but serious risk to the old and vulnerable and is easily transmitted from person to person. The virus is not absurd - but for the developed world it is far from a catastrophically destructive pandemic.

Yet if the Tory government had taken a laissez faire approach to the pandemic, all of the deaths would have been laid at the Tory door by our hopelessly irresponsible media. Advantages would have been obliterated by a storm of media fear-mongering. The Tories could have been finished for a decade or more.

In which case it was understandable that the government soon chose to be conspicuously proactive, whether or not the activity was actually useful. It merely had to be plausible, highly visible, intrusive and ruthlessly persistent. It had to grab the headlines and hold onto them for month after month. Hence lockdowns, social distancing, closed businesses, closed schools, masks and endless briefings.

All this has steered us into a political situation akin to wartime, where the UK establishment seems able and willing to impose a far more totalitarian governing ethos without major opposition. A development fully in line with our steady decline into totalitarian government.

It is always worth asking ourselves where the core problems are, even if we think we already know. As many have said over many years, a major problem appears to be the size and reach of government bureaucracy and government patronage. It is now well beyond democratic control. That ship has sailed and is taking us towards totalitarian government. There are too many vested interests, too much patronage, too many comfortably gullible voters, too much apathy.

This is what decline looks like from the inside. At least we have the virus to thank for highlighting that. Clear and distinct as philosophers used to say.
Posted by A K Haart at 13:20

You have a great knack for titles.

Yes, your account of what happened is brilliant. By which I mean, of course, that it's very close to what I believe, but I can't be arsed to start my own blog.

The whole situation raises the issue of where real power lies. As you say, had the government done nothing, they would have been pilloried by the media. So do the media call the shots? I doubt it, because the government can to some extent manufacture the news, and because the media are now increasingly dispersed and diffuse. If it lies anywhere, real power lies with expediency and cowardice. If you want to know where we are heading, ask where the grifters and shysters in all levels of society want to go.

I'll go a little further... Yes the Government had to be seen to act. Yes the main stream media are complicit in generating scare headlines. And the Civil Service do not take Government direction well. But the tensions between these arms of the Establishment are mere froth - they signify how the Government, Media, and Civil Service are all tied together looking after their own self interests.

You can argue that the Conservatives in government are possibly the best of a poor bunch. The Media are facing an existential crisis as other people pass opinions on the Internet for free. And the Civil Service 'rules of conduct' have been corrupted by politicisation.

What can we do? I don't think we can reverse the Nanny State during the pandemic, but we should campaign to roll back the restrictions afterwards. I'm inclined not to have or use a 'vaccine passport' unless I really have to.

Don't buy newspapers or watch main stream TV. I only have a TV licence because Mrs DiscoveredJoys likes to watch a few BBC programs.

The Civil Service is more of a problem. Most of the people are well meaning, but change is needed at the top. Either that or we have to 'privatise' as much of it as possible. A longer term response (around 20 years?) that probably will need a new party in power (or as a threat to a present party). Perhaps the Labour Party will implode further making room?

To summarise: Resist quietly but doggedly. Reverse the march through the institutions. The alternative is either a totalitarian state or widescale social breakdown. YMMV.

Sackers - thanks - it's mostly quotes from books I've read.

Sam- "ask where the grifters and shysters in all levels of society want to go."
Yes and in a huge number of cases that seems to be no further than their own comfort zones. Not quite grifters perhaps, but close. I came across people in the public sector who would tenaciously resist any process improvement which could possibly impinge on their own circumstances.

DJ - we have a TV licence for the same reason. In my experience the public sector generally is a problem, as is the sheer extent of government. To roll it back would entail a vast upheaval unless done piecemeal. Even then, people are extremely alert to that kind of thing. Maybe we do need the Labour Party to implode.