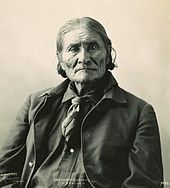 Last year I read a short book about Apache leader Geronimo. Essentially an autobiography where in 1905 over a number of sessions Geronimo dictated his life story to S M Barrett via a translator. Well worth reading even for someone knowing very little about this aspect of American history.

At times Apache life seems to have been idyllic.

I was born in No-doyohn Cañon, Arizona, June, 1829. In that country which lies around the headwaters of the Gila River I was reared. This range was our fatherland; among these mountains our wigwams were hidden; the scattered valleys contained our fields; the boundless prairies, stretching away on every side, were our pastures; the rocky caverns were our burying places.

When we were old enough to be of real service we went to the field with our parents: not to play, but to toil. When the crops were to be planted we broke the ground with wooden hoes. We planted the corn in straight rows, the beans among the corn, and the melons and pumpkins in irregular order over the field. We cultivated these crops as there was need.

Yet much of the book describes what seem like endless bouts of violent conflict, particularly against Mexicans, but also against the forces of the American government and settlers from the east.

During my many wars with the Mexicans I received eight wounds, as follows: shot in the right leg above the knee, and still carry the bullet; shot through the left forearm; wounded in the right leg below the knee with a saber; wounded on top of the head with the butt of a musket; shot just below the outer corner of the left eye; shot in left side; shot in the back. I have killed many Mexicans; I do not know how many, for frequently I did not count them. Some of them were not worth counting.

At times the Apaches seem to have been strangely incompetent.

We shook hands and promised to be brothers. Then we began to trade, and the Mexicans gave us mescal. Soon nearly all the Indians were drunk. While they were drunk two companies of Mexican troops, from another town, attacked us, killed twenty Indians, and captured many more. We fled in all directions.

As for all those scalps -

After a war party has returned, a modification of the war dance is held. The warriors who have brought scalps from the battles exhibit them to the tribe, and when the dance begins these scalps, elevated on poles or spears, are carried around the camp fires while the dance is in progress. During this dance there is still some of the solemnity of the war dance. There are yells and war whoops, frequently accompanied by discharge of firearms, but there is always more levity than would be permitted at a war dance. After the scalp dance is over the scalps are thrown away. No Apache would keep them, for they are considered defiling.

Towards the end of the book there is this plea from the old warrior.

There is no climate or soil which, to my mind, is equal to that of Arizona. We could have plenty of good cultivating land, plenty of grass, plenty of timber and plenty of minerals in that land which the Almighty created for the Apaches. It is my land, my home, my fathers’ land, to which I now ask to be allowed to return. I want to spend my last days there, and be buried among those mountains. If this could be I might die in peace, feeling that my people, placed in their native homes, would increase in numbers, rather than diminish as at present, and that our name would not become extinct.
Posted by A K Haart at 18:57

Email ThisBlogThis!Share to TwitterShare to FacebookShare to Pinterest
Labels: History

Interesting stuff. You can see faces like that, framed differently with shepherd's smocks and straw hats, staring out of the first photographs of agricultural labourers in Britain. A hard outdoor life makes its mark regardless of race and continent.

I've read a fair bit recently about Amerindian life before the white genocide. Given the endless intertribal wars you had to be very lucky to live long enough to show signs of ageing!

Sam - yes and to a lesser extent we see it in many people who spend much of their time outdoors even today. A soft indoor life leaves its mark too.

Jannie - that's my impression from reading just this one book. The death rate seems to have been appalling and not just among young men.

You can see the same in Elizabeth Warren aka Pocahontas.

Wiggia - and she still thinks she'll get Trump's scalp.