A diet too far 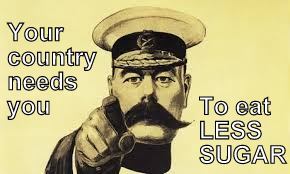 Adults and children should be instructed by the Government to halve the amount of sugar they consume and eat almost twice as much pasta, potato and other fibrous foods, an official report is expected to say this week.

The word instructed leaps out like an unwanted spurt from a lanced boil . Here's another word worth noting.

Within months, people could be told by ministers to ensure that no more than 5 per cent of their energy comes from sugars, down from 10 per cent, including those naturally present in honey, fruit juice and other foods.

Neither is there much to be gained by elaborating on the impertinence of it all, nor the vexed question of dietary science and its unreliability. The problem is government, what it does, what it ought to do and what it should do about hordes of self-seeking loons who grow fat sucking at the teat of the nanny state.

It seems to me that obesity is a symptom of a wider problem connected with personal responsibility. The consequences of our actions, of our decisions and lifestyles have become somewhat remote and diffuse. Much of this loss of responsibility and indifference to remote consequences is down to intrusive governments and perhaps this is the debate we should be having.

It is not entirely clear why anyone should opt to live an officially healthy life anyway, why we should not enjoy life in our own way and on our own terms. The trouble is that would require some kind of publicly acknowledged limit on what governments do and what they don't do.

This would leave almost everyone in politics with a smaller platform and even worse from their point of view, a more clearly defined platform. For a political culture grown fat and flabby on overindulgence in hyperactive interference it would be a diet too far.
Posted by A K Haart at 19:32

But does one really bother to take any notice of government advice?

So, more civil enforcement officers now armed with 'muffin tongs' dishing out fines to folk who cannot pay. Add a minister and department in charge and you achieve the real objective - employment opportunities for the useless classes.

Michael - that's why they give advice, so when it doesn't work they can introduce further measures.

Roger - yes that's the name of the game. They are making business for themselves.

On the obesity thing, the ideas about sugar are simplistic in any case. Look at the list of ingredients in most of these things and it is long with all sorts of stuff. Some of that stuff is designed to heighten taste etc. as well as being addictive. If an individual does get hooked certainly they get the sugar, but other things as well which make contribute to obesity.

Demetrius - life is less physical too, and any kind of exertion uses up calories. Houses are warmer so the body doesn't need to generate as much heat. There are numerous factors and as you say, pointing the finger at sugar is simplistic.