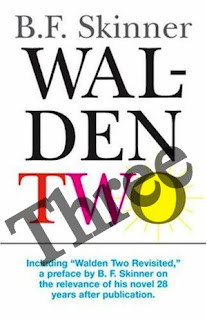 Society attacks early, when the individual is helpless.
B F Skinner - Walden Two (1948)

B F Skinner’s novel Walden Two provides a fictional setting for what he saw as a potentially achievable utopia although he was not so sanguine as to think it ever would be achieved. The book sold millions of copies and certain features of the modern world suggests many influential people are probably familiar with its ideas.

Skinner’s basic message is not complex – a non-competitive self-governing and pragmatic society could condition its inhabitants to be contented, possibly even happy. Keeping things that way in Walden Two is the job of the Board of Planners, members of which serve for ten years and appoint their successors. These are the behavioural engineers who oversee managers who manage the various departments. Apart from these roles they are merely ordinary citizens with no special status

Although such a utopia is unlikely to be achievable globally or even long term on a smaller scale, it is possible that Walden Two has spawned a number of ideas in the minds and general outlook of elite global bureaucrats. Let us call these ideas Walden Three.

Popular assent is always interesting because it is a litmus test for power and how power expects us to behave. If a significant number of people passively assent to certain aspects of daily life then there are usually others who benefit, almost always those who planned and engineered matters in the first place.

To take one possible example as an aspect of Walden Three. Our fake UK democracy based on passive assent makes sense if we accept that it came about by systematically altering environmental variables. An essentially two-party adversarial system is a vitally important environmental variable and there is no doubt that it is manipulated as in the 2011 AV referendum. In Skinner's terms it was manipulated by behavioural engineers. They may not think of themselves as such, but that's what they are.

In which case there is nothing to be gained from plugging radical alternatives because those who plug them cannot do it by systematically altering environmental variables. Our Walden Three democracy ticks the behavioural boxes it is supposed to tick and doesn’t tick those it is designed to leave alone such as meaningful reform. China has something similar if less subtle.

What we have at the moment is far less formal and structured than Walden Two, and far more complex with a vast array of caveats and exceptions, but the basic controlling structure seems to be fairly consistently applied. It may be fallible, complex and layered but in real life that was inevitable.

What else do we see in Walden Three – what is visible now apart from the failure of UK democracy? We see an educated middle class being replaced by a more adaptable citizen class, a general lowering of expectations towards a more sustainable global citizens' lifestyle. We see the traditional role of parents replaced by official controls and responsibilities. Ultimately, as in Walden Two, parents may have few childcare responsibilities for their own children, it depends on how the Walden Three planners see it.

We see the official view of a safe and healthy lifestyles slowly becoming compulsory. We see even minor forms of dissent controlled by endless disapproval and ostracism. We see well-financed mass narratives obviously engineered to fit exiting narratives and obviously designed to further a prime social objective of global equality for all citizens. Which is why the middle class of the developed world has to go because their lifestyle is not thought to be globally sustainable.

Given the importance of our consumer society and the trillions it spends each year and given the global reach of the modern world, Walden Three seems inevitable. It may even be achievable and it isn’t easy to see how things could be otherwise if we are to have a complex but comparatively stable global society. We do not need a global society of course, but that’s not on the agenda.
Posted by A K Haart at 19:57

All these grand perfect schemes founder on the inevitability of what theologians call Original Sin - both among the all-powerful planners and their unfortunate subjects. - whether the oppression is suffocatingly soft and apparently " caring" or harsh and murderous, they all founder on the fact of human nature which can be inspirational or just plain cussed ( sometimes both at once)

This stuff was cooked up in the psychology of 1950's America - a closed environment where control was possible and was attempted. Whilst the mechanisms of control are useful to politicians of all stripes human cussedness keeps changing the mechanism. What bothers me is that Apple and Google et al are now in charge of delivering the mechanism. Internet apps are the new 'rat's maze', Fischer's heirs can see the possibilities and so can their masters.

As a teenager I was involved in moving an Armoured Division around. First there was the planning and directions issued by men who had great experience, were intelligent and paid attention to detail that they were familiar with. Then there was the process of beginning and controlling the movement. Then there was what happened next. Life was always full of surprises, some of them unwelcome. So when later I encountered planners etc. it was difficult to accept their confidence and often certainty that what they predicted would happen would be the case.

Edward - yes, it is impossible to create rules which cover all eventualities and all kinds of behaviour. Not only that, but rules have to be interpreted and we know where that leads.

James - as we see already with people caught speeding.

Roger - "internet apps are the new 'rat's maze" that's a good point and it seems set to grow into every corner of our lives. Nutrition seems to be a nut the controllers would love to crack. The secret is to do it slowly.