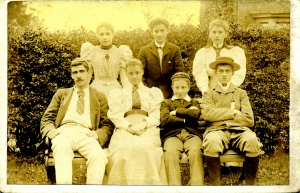 These two extracts are from my aunt's memoirs. I posted earlier on her account of the Zeppelin raid on Derby. The first piece is about family reading habits - they were a large family. The date would be about 1913.

After Sunday school, in winter or when it was wet, my mother and two older sisters took it in turns to read aloud. We’d sit around the fire in the living room, Mam would read older books for the older ones and younger books for the youngsters.

At the age of six or seven we were listening to Pickwick Papers, Oliver Twist, David Copperfield and always near to Christmas, A Christmas Carol. David Copperfield was my favourite, Scrooge came a close second. In later years I wept over A Tale of Two Cities.

Later, round about 1917 or 1918 my aunt won a scholarship to a good secondary school with an intake of mostly fee-paying pupils.

There were, we gradually found out, scholarship girls from other schools, about six of us altogether and we stuck together. I had never come across snobbery before, but the first morning at ‘break’ we were in the yard and a girl came up to me and asked loftily,

‘Are you another scholarship girl?’

‘Yes I am,’ I said as I was proud of myself. She went back to her friends and it was obvious they were making fun of us and so it continued. There were few of us, but most of them, their parents paid fees and they thought they were superior. It was not a good start for us.


Impossible to know how much damage this kind of thoughtless snobbery may have done, the sparks of resentment it may so easily have kindled in a person who would one day use it to ply their political trade.
Posted by A K Haart at 07:00

My granny was orphaned at 10 and put in an army orphanage in a posh part of London. Local children would shout 'Charity Kids - Charity Kids' as the girls trooped to church (twice) on Sundays.

Roger - yes, it either makes you or breaks you I suppose.

What was that about an Englishman opening his mouth and another Englishman despising him?

James - yes and it still goes on.