I hope she wins 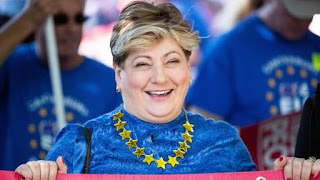 Emily Thornberry has made an urgent plea for nominations as she faces the possibility of being knocked out of the race to become Labour’s next leader.

The shadow foreign secretary made a lengthy appeal to party members on Sunday, arguing that she “raises the game” of the other candidates and asking twice for members to “give me a chance” and “get on and nominate me”.

Emily seems to be a leading light of the NVP (Not Very Popular) wing of the party so her chances appear to be less than wafer thin. Yet to my mind she could probably stuff Labour further down the plughole of political history and she could do it in an entertaining way. Come on Emily!
Posted by A K Haart at 16:41

Yet another fat lawyer, creaming the State, while being an obnoxious and stupid person to boot.

Why do thick, ugly people gravitate to Labour all the time?

Labour could doom themselves to oblivion with any of the current contenders. Thornberry and Starmer are probably more sensible than the others, having had jobs in the law.

Emily's qualities certainly are unique, though. Nobody else manages to combine patrician hauteur with such barmaid coarseness. A sure-fire vote loser.

Sam - to my mind the only worthwhile candidate they have is Starmer but he isn't exactly one of the workers.

But Starmer was there on at least some of the picket lines for at least a few minutes. Haven't you seen his video?

Graeme - is that one of those occasions where he takes his tie off to show how ordinary he is?