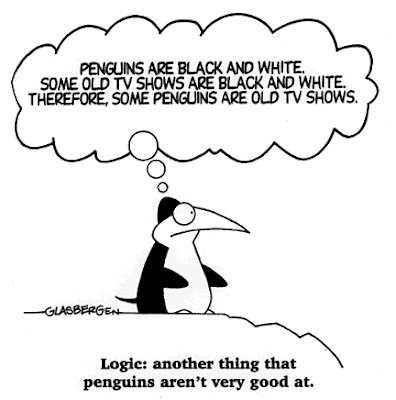 Logic is strange stuff isn’t it? What exactly is logic do you think? I don’t mean the formalism of logicians, but the premises and valid conclusions we search for in our personal philosophies. Because we have a very strong disposition to accept the logical and reject the illogical, even if we don’t always identify which is which. It has fascinated us since Aristotle defined his syllogisms.

How is logic related to the physical world though?

The question could also be asked of mathematics of course. I think the answer in the case of mathematics is that it is like language - descriptive. But as with language, mathematics can describe imaginary and impossible situations, or no situation at all. Logic I suppose is much the same in this respect. For example:-

This is a contradiction if we exclude special meanings. There is no conceivable situation where a dog is not a dog, but I’ve still made a sentence of it even though it says nothing about dogs and nothing about the real world. So the flexibility of language, mathematics and logic allows us to speculate, but logic seems to leave rather less room for it than the other two. In terms of speculative potential, the order seems to be.

This of course is philosophy, not science, and I think we help ourselves by nudging science to one side in deliberations of this kind. Because science doesn’t cover every aspect of everything. Science doesn’t tell us what logic is or what its boundaries are.

The pre-Bang situation was illogical.

Surely that sentence is in a sense illogical if we accept that only logical situations are real because nothing else makes sense. Otherwise we have no boundaries to reality of any kind.

I think there is more to logic than we have ever rooted out. Something fundamental we haven’t quite grasped or made the best use of. Partly that’s down to logical formalism – casting it into symbols and rules, sucking the blood out of it, making a business of it. At least in my view it is. Barriers to entry again.

I think we may “know” in a philosophical sense that the pre-Bang situation was a situation and it was a logical situation – a situation where logic held sway. In other words, logic is older than the physical universe and predates it.

Email ThisBlogThis!Share to TwitterShare to FacebookShare to Pinterest
Labels: philosophy

You lost me at "penguins are black and white" AK:)

To begin with I thought you were leading up to a joke about logic both being and not being a dog's dinner!

Strange indeed. Arguments in court and parliament are supposedly based on facts and then extend by logical argument to a conclusion. But I don't think anyone would say the results are satisfactory.

Then a logic designer can put together a silicon chip using logic and the result is a GPS navigator that certainly seems to work OK. So where is the difference?

As for logic itself, is it a human construct or does humanity derive from some inner logic of the universe - I think so. Did logic precede 'creation'? dunno, something very queer indeed, possibly so queer we will never know, but I hope not.

David - joke? I'm sure that too often it is and isn't true.

Roger - silicon chips seem to show us what is possible, but engineers tend to do that.

"does humanity derive from some inner logic of the universe" yes I think we do.

I have just bought an "Eric The Penquin" Calendar for 2013. It is the only way of making the future look logical.

Demetrius - Eric cards are good too, but can we afford to post them?

Sounds a tad Chomsky, that.