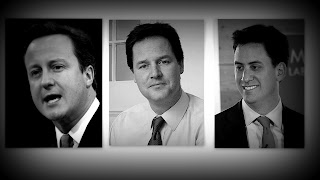 So, if we have this leadership/followership structure within society, where do weird characters such as Dave, Nick and Ed fit in. I say weird here, because although they aspire to leadership they don't aspire to lead.

Now we all know what rotten leaders we end up with, but political parties are not selecting leaders for us to put our cross against. They are selecting high-level followers.

The modern world tends to be much more covert about leadership than in the quite recent past. Winston Churchill was a leader, David Cameron is a follower. Leadership now lies with permanent global bureaucracies, much of it being conducted covertly and away from public view. Leadership is being taken out of the hands of amateur national politicians and passed on to professional bureaucrats, oligarchs and wealthy business executives.

The point of becoming a senior minister or Prime Minister is not so much the role itself, but what comes afterwards, the chance of walking the real corridors of power. The point of so-called political power is that it provides access to real power, the covert leadership we rarely see, the permanent bureaucratic structures such as the UN, EU and the boards of major global corporations.

So we are not so much electing leaders as handing career opportunities to some highly ambitious flunkies. Flunkies such as Dave, Nick and Ed. We’ll never get leadership from any of them because they were never selected as leaders in the first place. They were selected as followers.

They don’t get to lead properly until they move on. Maybe not even then. The global pole is really very greasy indeed.
Posted by A K Haart at 07:00

Interesting take on the situation in which we find ourselves.

Perhaps the public need to be educated that the political elite are indeed supposed to be followers in that they are supposed to follow the wishes of their people and not those the global elite.

I agree with Witterings, but there is a sense in which we might benefit from being told that our wishes are sometimes mistaken.

One big problem with Cameron, Clegg, and Miliband's "followership" is that they need to placate short-term and often contradictory desires which the electorate express. This is an inherent problem for democracies, but is exacerbated by our current system, and the speed of our media. We want free money, and welfare, and a booming economy, and better education, and fantastic health care, and a potent military. Politicians daren't say that we can't have one or more of these. They are in the position of parents who want to remain popular with their children. So they turn themselves into lying liars in order to retain office.

In a funny sort of way, I don't think there is all that much wrong with Cameron, Clegg, and Miliband. They just want to be liked, to be "top guys", to be good prefects. They just didn't realise that our system requires them to do corrupt themselves in order to gain or keep office. A mild and fairly common form of personality disorder, made dangerous by force of circumstances.

Got it in one there. The trick for us is now to find and push a mechanism which results in us not being "led" by them.

I agree with Witterings and Sam but also feel depressed that nothing will come of this govt or the next or the next. In fact I am not sure what a 'good' government would look like. As Sam says the requirements are contradictory. This may have been concealed in a growing economy but now the tide has gone out we can see that not only are the bankers naked but the politicians are naked too.

Witterings - that's right, their leadership relationship is with the wrong people.

Sam - "In a funny sort of way, I don't think there is all that much wrong with Cameron, Clegg, and Miliband."

I think this way at times, but I also think they should see the problem themselves and be honest about it.

At other times, the relentless nature of their dishonesty makes me wonder if the personality disorder is not so mild. Reasonable monsters maybe.

James - yes, we need to dump them and their parties.

Roger - yes, the requirements are contradictory, but honesty and transparency would sort that. We'd behave like adults and prioritize.