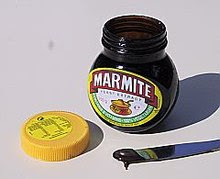 What are your favourite addictions? I have quite a few. Marmite is one, trousers another.

But maybe that’s because the elite are addicted to trousers too?

No that can’t be right. It can't be merely a matter of elite addiction being totally okay, otherwise cocaine would turn out to be a vitamin. Maybe it’s because the elite don’t mind we proles having trousers but do mind us having cocaine. Anyway, the drug squad mostly wear trousers, so I suppose they have to stick with what is enforceable.

But on a slightly more serious note, what is it about addiction that so concerns us? I’m not really addicted to Marmite, I could give it up any time - honestly. I couldn't give up trousers though - and how about wine?

Well I’d not be so keen on giving up the occasional glass of wine.

Tea and coffee? Blogging? TV? Personal hygiene? Shaving? Theories? There are a huge number of things we are addicted to in the sense that they are habits, but we don’t count many habits as addictions, however powerful they may be. Even addictions as powerful as Marmite and trousers.

So are are addictions merely habits or a different type of habit and do they actually matter if they don't harm anyone else? Do they matter as much as we think?

I’m not sure, but I suspect not. I suspect it’s mostly a matter of social conventions and vested interests. If a drug is cheap or easy to grow, the elite and puritans don't want us taking it, even if we know how to handle it or wouldn't take it anyway.

The trouble is, the issue is rather emotive and it’s difficult to see the wood for the trees. I feel we should make more effort to clarify the issue of habit and addiction though. Drugs policies don’t work, although that’s often the reason policies are pursued. Policies that don’t work give the policy enforcers a job for life.

They become addicted to the policy and that's certainly one habit we could stop treating leniently.
Posted by A K Haart at 07:00

James - all but sailing and rugby for me. Never tried rugby. Would very like to have done some sailing though. Always lived too far inland and didn't fancy reservoirs.

A shop near where we used to live made their own fresh every morning - delicious.

Roger - yes and we've been doing a bit of that in this fine spell. Makes you realise what you were missing.