Pete and Dud on the election 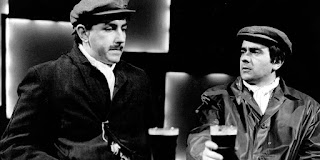 What do you fink of this ‘ere election then Pete?

The forthcoming general election do you mean Dud?

Yes Dud. You mean the result of our referendum about leaving the European Union or EU as it is usually called. Britain voted to leg it for the exit so it's called Brexit.

Oh. I wondered how breakfast came into it cause nobody ever gets on to bacon and eggs and so on like a proper breakfast like my mum used to make. So what d’you reckon to the EU then Pete?

It’s a club Dud. The EU is a club where the British government has to pay an annual subscription to prevent it from leaving even if it wants to. A bit like the mafia but more expensive and not quite so violent.

Oh. So why did we have a referendum then Pete?

It was a mistake by David Cameron. He thought we’d paid in so much in subscriptions that people would vote to stay in the EU just on the off-chance that we might get something out of it one day. It’s a bit like the lottery. You have no chance of winning but you keep buying tickets just in case.

Rather like your adventures with Valerie Peabody Dud. You couldn’t get away from her could you? Like quicksand she was wasn’t she? There should have been warning signs – Beware Valerie Peabody Danger Zone. Enter at your peril.

It was ‘orrible Pete. It still have nightmares about Valerie Peabody. I wake up in the night I do – I wake up sweating all over at the thought of it. I’m sweating a bit now Pete, just thinkin’ about it.

I know you are Dud - I can tell. Well the EU is a bit like that, a bit like Valerie Peabody but more expensive and less violent.

How 'orrible. So who do you fancy for this election then Pete?

Well I was watching that Jo Swinson on television –

Yes Dud she is a big lady but we aren’t supposed to notice that kind of thing these days.

I do, I notice that kind of thing.

I know you do Dud.

So what did you notice Pete – about that Jo Swinson?

Well Dud as you say she’s big and –

Email ThisBlogThis!Share to TwitterShare to FacebookShare to Pinterest
Labels: spoof