From the BBC we have

She told Germany's parliament the issue could be a defining moment for the EU.

The call comes as leaders meet for an EU summit focused on how to deal with the many undocumented migrants - mainly Africans - who continue to risk their lives to cross the Mediterranean.

Next we have a story about Cameroon

For a year and a half, the Cameroonian military has been accused of beating and arresting people suspected of being separatists, torching homes and killing unarmed protesters.

For their part, separatists have taken up arms and have also turned to violence. They have been accused of burning markets, launching attacks from civilian bases, beheading soldiers and kidnapping people they suspect as traitors.

Finally we have a graph from the UN which tells a story about Cameroon population statistics and projections. 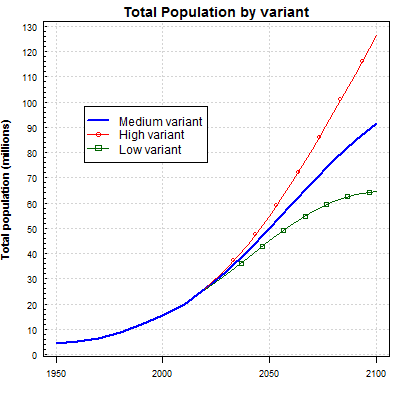 Obvious question - where is the happy ending?
Posted by A K Haart at 19:29

Email ThisBlogThis!Share to TwitterShare to FacebookShare to Pinterest
Labels: international

There seem to be two likely scenarios. The first is "Fortress Europe", where we pull up the drawbridge and one group of people live in relative prosperity and peace while another group live in overpopulated squalor and intermittent war. The Chinese will get involved, and then all bets are off.

The other is that we allow in such huge numbers of migrants and refugees that Europe collapses and becomes so much like Africa that the would-be migrants don't bother any more.

There is of course a third option, favoured by the BBC and other bien pensant progressives. Millions of Africans will come to Europe and we will live in harmony as we destroy the old racist European culture that created problems such as war and poverty, and humming birds will hum and rainbows will stretch across the sky.

Them of us who have done demographic stats etc. have been aware for some time that we are now at take off point in world population increases. If what we know of history is any guide we have reached take off point for mass migration on a scale never before seen in human history. So what happens next? History suggests that the consequences will be violence on a scale that leads to massive population reductions and the collapse of existing societies and cultures.

"the consequences will be violence on a scale that leads to massive population reductions and the collapse of existing societies and cultures."

When Merkel is executed.

Sam - not very encouraging is it? The sheer scale of population projections boggles the mind.

Demetrius - and no obvious desire to stop it.

DCB - we are bound to wonder about that.

James - deposed ought to be enough but probably not.

You are all worrying about Cameroon, but there is quite a bit of distance and it is a poor country. Consider Saudi Arabia instead, where 30 million people live in a desert that used to have water for at most 3-4 million and where today they consume much of the oil they extract for desalination:

Sooner or later 20-25 million of them will have to move somewhere else.

Blissex - good point, water could become a major problem in quite a few areas of the world.