Most people are probably already aware of what Volkswagen has done with respect to nitrogen oxide (NOx) emissions from a large number of their diesel cars.  The EPA Notice of Violation can be found here. A timeline of events is here.

Briefly, VW appears to have admitted that engine management software used various clues such as wheel alignment to detect when emissions tests were being run as opposed to normal road driving.

The health issues are complex. Millions of UK citizens subject themselves and their children to atmospheric NOx pollution by living in cities, but for a number of reasons concentrations in the UK are declining. No thanks to VW apparently. 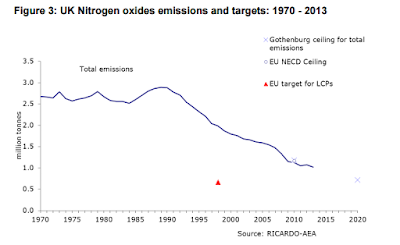 Email ThisBlogThis!Share to TwitterShare to FacebookShare to Pinterest
Labels: technology

I've got a VW diesel. It's an intelligent and resourceful car, so none of this surprises me. Apparently German scientists are working on a satellite-based system which identifies which dodgy MOT garages will pass your elderly car in return for a small financial consideration, which is dispensed from a little slot in the glove compartment.

Incredibly stupid - unless you were sure everyone else was doing it. Probably tells us more about regulators than car companies.

Sam - another wheeze would be for the car to switch off its braking system so brakes are in a pristine condition for the MOT test.

Roger - it was incredibly stupid and it speaks volumes about the regulators, because for some reason VW decided to take the risk.

Forty years ago a colleague who liked diesel cars was urging me to think about one when I was looking around, because as a high mileage user needing a larger car it would be a good idea. But I did not like the smell.

Re air pollution. This depends on what you are measuring. If you measure some things but not others we might easily think that we can improve things. But the others may well have some features that are bad. Indeed there are a whole lot of things not measured which might not be doing us much good.

Demetrius - I had a similar experience. A colleague had a VW Jetta diesel which at the time was unusual.

I agree with you about air pollution. An exceedingly complex subject where official policy is not necessarily rational.

Just to level things up a bit, this is a reply to a "worried" owner about the VW debacle on the Honest John motoring site the, panic has started !

If VWG is cheating the NOx test, then everyone else with 2.0 litre diesel engines of the same power outputs must be

I couldn't really give a monkeys...

My chum at our garage popped me into a low-mileage Polo last week, and the safe thump of the door reminded me that the whole car was a damn sight safer than my current Peugeot!

They're all at it, and as I don't take any notice of any 'rules' laid down from Prescott's ridiculous, posturing 'Kyoto agreement', or any others for that matter, I may well get the Polo, as there's probably going to be a pleasant bit of 'negotiation'...

On the other hand, I may take my time!

Wiggia - possibly, although the VW trick seems too foolish to be copied by others, but if the business is at stake then who knows?

Michael - I don't think many people care one way or the other. I certainly don't.

I run a titchy little Toyota Yaris diesel. On a run it will give me 65m/gallon. The only problem is that every time I get home and park I feel impelled to kiss it on the bonnet. The neighbours worry about me!

David - one problem with diesels may be that 65m/gallon. Few people want electric cars when they can achieve that kind of mileage from a diesel.

David - one problem with diesels may be that 65m/gallon. Few people want electric cars when they can achieve that kind of mileage from a diesel.


The problem with that argument is that diesels because of all the constraints put on them and the ones you can now guarantee will be added strangle the engine and the real life mileage is no longer that big an advantage over petrol.

If you factor in the extra costs and the fact that unless you drive more than twenty ? thousand miles a year you gain nothing and the repair costs of increasingly complicated diesels that are astronomical the case for diesel is becoming very weak.