Here's an interesting piece posted by Jason Kottke at the end of 2013.

Sometime in the past few years, the blog died. In 2014, people will finally notice. Sure, blogs still exist, many of them are excellent, and they will go on existing and being excellent for many years to come. But the function of the blog, the nebulous informational task we all agreed the blog was fulfilling for the past decade, is increasingly being handled by a growing number of disparate media forms that are blog-like but also decidedly not blogs.

I'm sure he's right - people have so many ways to pick up links that blogging is bound to decline, at least relatively and probably in absolute terms too. Here's the Google Trends graph for the term blog. 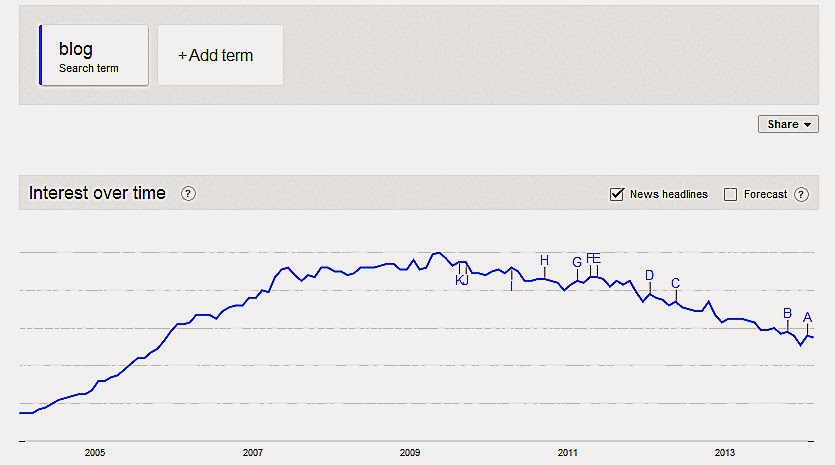 Not a huge decline, but it has been going on since about 2010, so isn't a new trend. What does the future hold for blogging? Well the decline looks real and is easy enough to understand because of the proliferation of alternatives and social media fashions. Even anecdotal evidence suggests there are a large number of defunct blogs out there.

What will be will be, yet blogs played a major part in exposing the shonky science behind the climate change scam and there is still much to do. Will other forms of social media take on this kind of work should it become necessary?

Email ThisBlogThis!Share to TwitterShare to FacebookShare to Pinterest
Labels: blogging

Yes, lots of people seem to be giving up blogging and overall visits to blogs are falling.

But I enjoy getting stuff off my chest by writing it down and clicking 'publish' and people read it, so I shall keep going :-)

Mark - me too. Maybe blogging will eventually settle on a stable participation level.

Those who wish to continue writing, but to communicate with other writers and debaters, may wish to combine in a new "Republic of Letters".

Would anyone here care to discuss with me setting up a philosophically liberal online magazine?

Those who wish to continue writing, but to communicate with other writers and debaters, may wish to combine in a new "Republic of Letters".

Would anyone here care to discuss with me setting up a philosophically liberal online magazine?

I'd like to think that my grandchildren will one day be able to access a few of their grand dad's thoughts and interests, as we probably won't write to each other that much!

I presume that 'Scroblene'. will be around until Google decides to pack up working with bloggers, but until then, I'm quite happy reading your posts, and also many of the others as well!

As a completely different name, I do much more on a gardening website, because we're all different people there! Love it to bits! Mrs S is an aficionado of The Archers independent websites, and they are a good example of proper blogging, because the BBC couldn't/wouldn't cope with the flak they kept getting about their dire story lines!

Was there a time when personal blogs were a sort of social media? The growth of these and personal contact means would certainly have led to a reduction. This would leave blogs to those with more to say or discussing more complex etc. matters.

Sackers - I always assume that most visits are short and casual. Is it worth doing a post on your "Republic of Letters" idea?


Michael - I've never heard of Archers websites, but the BBC isn't keen on flak is it?

Demetrius - yes, you need certain reserves of something or other just to keep writing the things!