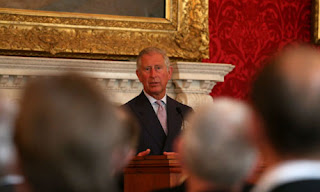 The Guardian tells us :-

The Prince of Wales has criticised "corporate lobbyists" and climate change sceptics for turning the earth into a "dying patient", in his most outspoken attack yet on the world's failure to tackle global warming, made shortly before he is to take over from the Queen at the forthcoming meeting of the Commonwealth.

It seems to me that Charles gives too much away when he promulgates his royal views on climate change. As heir to the throne, he has blundered his way into a situation he could so easily have avoided. We know for some time that isn't up to snuff when it comes to teasing apart the strands of propaganda surrounding this issue.

He has no need to remind us.

It's a huge pity because it would be delightfully refreshing is someone of the nob persuasion finally got a grip on these matters, but that's another issue for another day.

I don't mean to imply that Charles should be a sceptic, but it is surely not be beyond his capabilities to work out that sceptics have a point. There has been no global warming for about fifteen years and it's pretty easy to discover that this rather important temperature hiatus has become an accepted fact on both sides of the climate fence.

One side is scratching its collective head over this temperature standstill, the side Charles favours with his support. At the very least he should know that now is a time for head-scratching rather than bleating yesterday's words like a lost sheep.

Maybe his royal crap-detector wasn't triggered by the shift from global warming to the rather less precise climate change. Clearly his suspicions were not aroused by this switch and it never occurred to him that climate terminology had thereby become less precise. One is left wondering what else the guy doesn't get.

It's a mistake his mother never made and never would have made. Presumably she is somewhat smarter than he is.
Posted by A K Haart at 06:00

Email ThisBlogThis!Share to TwitterShare to FacebookShare to Pinterest
Labels: climate

I don't mean to imply that Charles should be a sceptic

As one of the instigators, he could hardly be sceptical of course.

Wasn't he a great fan of "The Goon show"? I recall him doing an excellent Bluebottle impression.

James - no - his position is untenable really but he does appear to see it.

"It's a mistake his mother never made and never would have made. Presumably she is somewhat smarter than he is."

Unlike her, he doesn't read your blog.