A visit to the Apple store 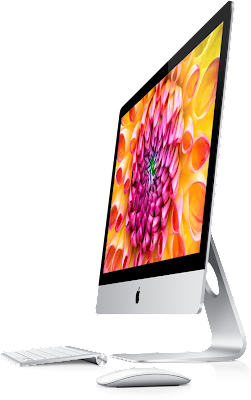 During our recent Cirencester break, we wandered into one of those computer shops devoted entirely to Apple products. I've never owned anything produced by Apple because I've never been convinced that the higher price is worth it. Not for web browsing and basic stuff like that anyway.

Even so, Apple make some sleek kit, especially effective when displayed in a somewhat minimalist setting as in this case. One was a big all in one computer with a dinky little keyboard as pictured above. It occurred to me, as I blanched a little at the price tag, that what so many people have said about TV is right. By the way, I blanched so much, I can't recall the price - blotted it from my mind like a bad dream or a speech by Tony Blair.

But why bother with a TV set when you can have a computer and watch it on that instead? Why not save on the BBC licence fee and just go for it? Why pay £145.50 each year for owning a TV?

Okay, if one went for Apple, that licence fee might seem cheap, but it just struck me as I walked around that Apple store. Sometimes there are things everyone knows, but a certain commonplace situation can hit you so hard it feels like a revelation - even though it isn't.

An all in one PC and a tablet - what more do we need? It's not as if TV is any good.

The other thing that trickled through my mind was to ask myself - how many people are already doing this? How many more will add to that unknown number and take the plunge in 2013. How many more will follow them in 2014 - and will it become a trend?

Will it eventually become such an issue that even the mainstream media take notice? Maybe they already have - I don't read the msm.

Checking with tvlicencing.co.uk, I came across this FAQ and its answer.

How many people haven’t renewed their licence?

The information requested here was exempt from disclosure under section 31 of the FOI Act.
[My link]

Really? It's that sensitive is it? Yet figures from the same source show no indication of a reduced number of TV licences.


*For each financial year from 1 April to 31 March. These figures are approximations of the number of licences in force. They do not include concessionary licences held by Accommodation for Residential Care (ARC) premises.

But their figures are not up to date as you can see. In the end the BBC is merely a content provider and surely it is difficult to see how this situation can struggle on. I find the issue more fascinating than the programmes, if a little slow to get going.

Anyhow, I didn't buy an Apple computer. Nice kit though.
Posted by A K Haart at 06:00

As a Mac user, interesting reading this. I'm also a PC user.

A Vauxhall will go along the road perfectly well for some time and get you from A to B. So will an Audi or Aston Martin.

Big deal, says the Vauxhall owner - my car will do anything yours can do.