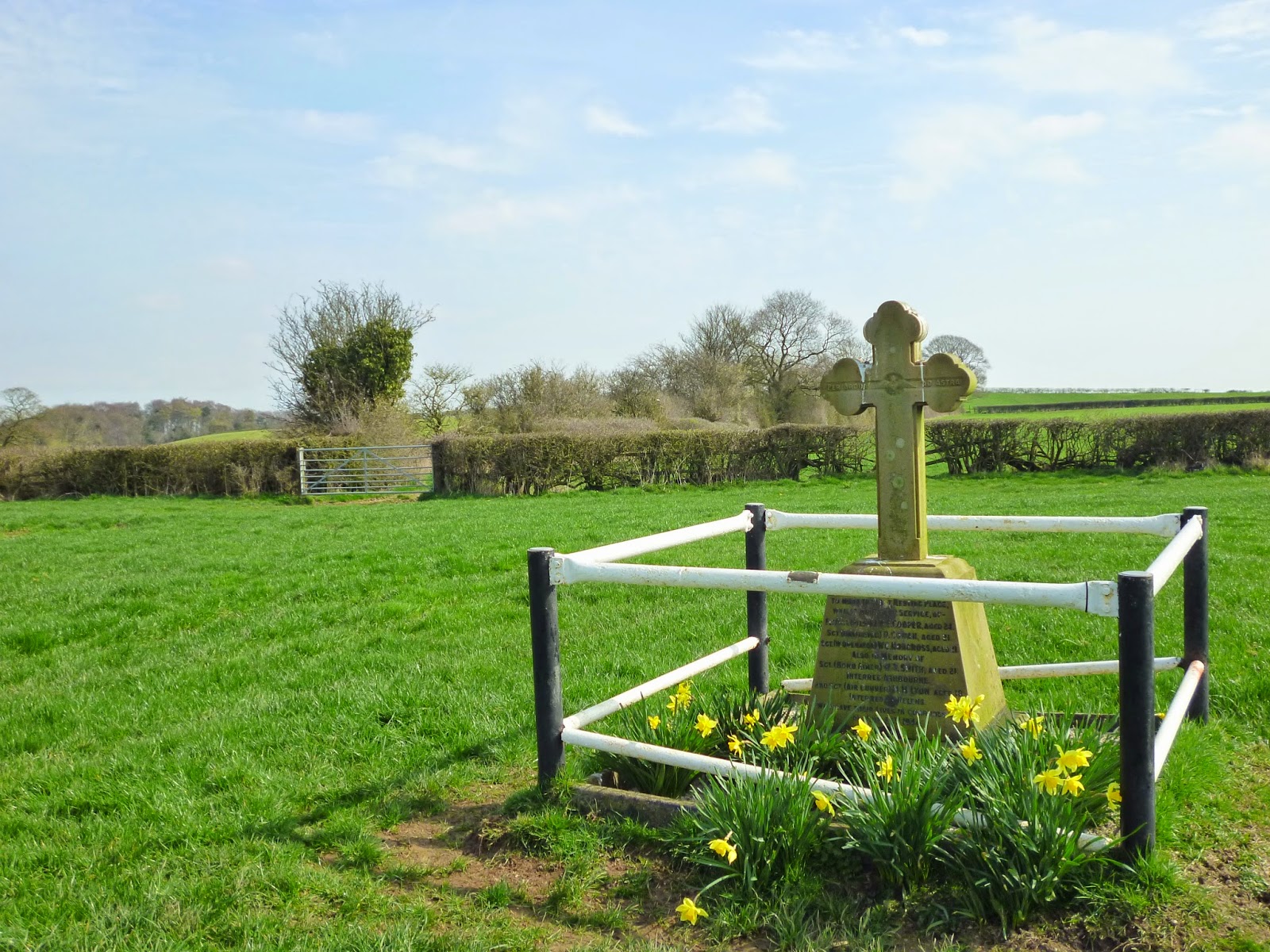 We were walking in the vicinity of Ecclesbourne Valley today, well-known locally for its heritage railway. The area is mostly rolling farmland rather than the limestone hills we prefer, but pleasant walking on a lovely sunny day.

Not far from the path on Bullhurst Hill is a memorial to the crew of a Whitley Mk V twin-engined bomber which crashed there in 1944. It's a sombre sight set in a large field with no obvious reason why the aircraft might have crashed. A reminder of just how young the airmen were too. From Peak District Air Accident Research

The crew had flown a night cross country navigation flight and were returning to their home base at Ashbourne when the aircraft dived into the ground only a few miles short.

Following the crash three of the crew could not be accounted for and were assumed by No.42 OTU to have "disappeared with the aircraft which went fifteen feet into the ground". On the 1st August the vicar of St Saviour church in Ashbourne, Canon Farrow, took the memorial service for those who had died after which he held a committal service at the crash site.

Sgt William Smith was buried at Ashbourne cemetery only a few miles from the crash site and Sgt Maurice Lyon was buried at St Helens Cemetery in Lancashire. 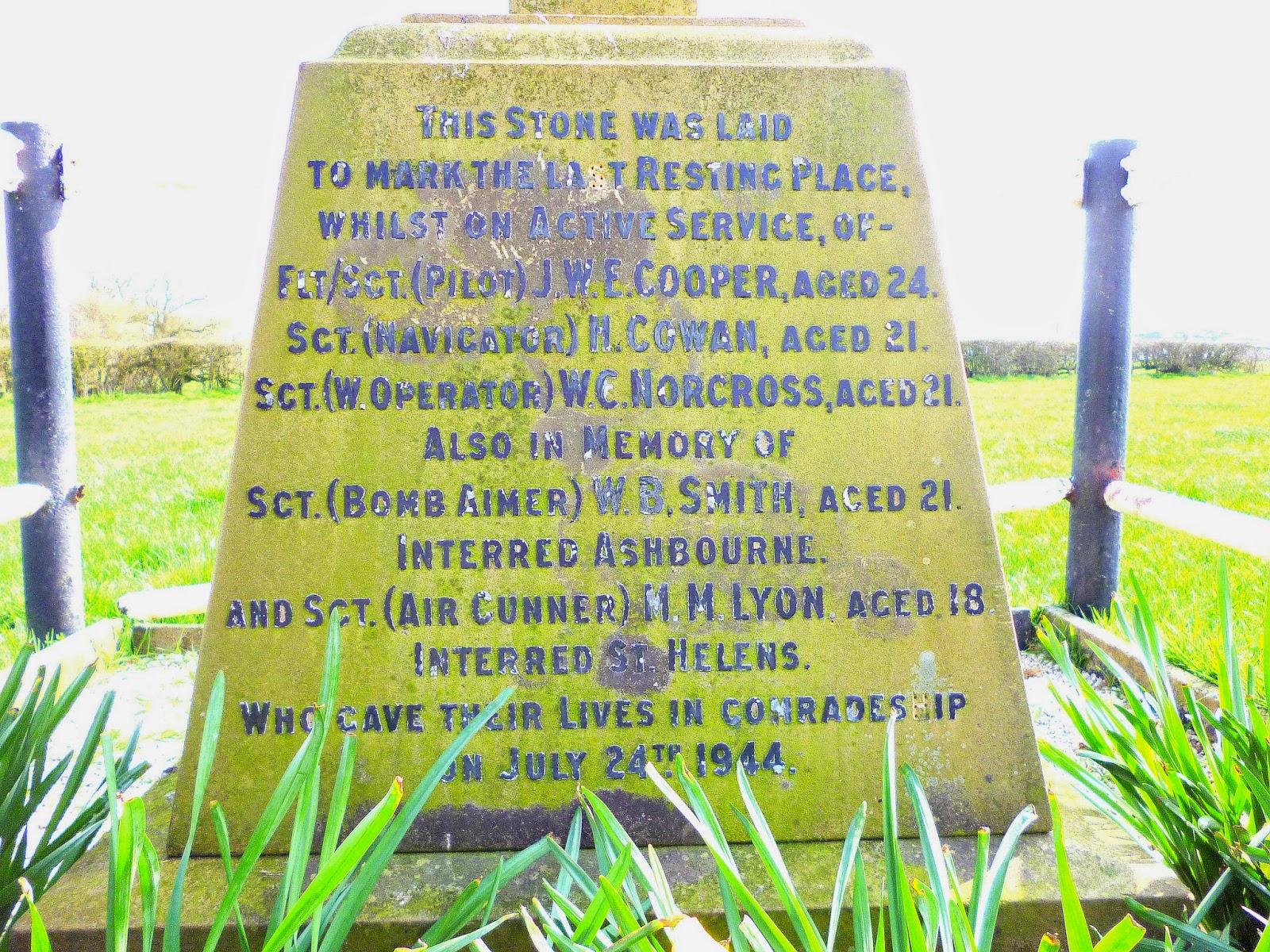 Email ThisBlogThis!Share to TwitterShare to FacebookShare to Pinterest
Labels: Derbyshire

I used to live at Hazelwood in the Ecclesbourne valley where I made a brief sentimental detour today, stopping for a glass of excellent Bass in The Puss in Boots.
A magical,part of the world in my recollection which we roamed with a freedom hardly imaginable for today's children .

The bowling green in the playing field next to the memorial hall is beautifully landscaped. It was a work done mostly by villagers themselves. I even walked around the churchyard, recalling some of its residents from the inscriptions

Edward - if you spotted lots of cars parked near to The Puss in Boots, they belonged to our lot.

There are several similar sites near us in the South Downs. I wonder whether they are more common in uplands (planes flying into hills which they couldn't detect in poor visibility) or whether they are scattered around airfields.

My dad's job in the war was driving an articulated lorry to collect them. He talked about retrieving bodies when there was little left to retrieve ("Everything went down into the flying boots") and also said that he would often bring back only the wings and fuselage, the engines burying themselves beyond reach.

I guess that today, the poor victims would be lifted out even if it meant major civil engineering work. "There was a war on..."

Sam - these sites seem to be all over the place, although no doubt there are patterns. This one was a night flight so that must have contributed.

Your dad had a grim job. I imagine the Whitley's engines are still down there together with those three missing men.

Yes,
I expected more people to be in the pub because of the number of parked cars.